Home | Blog | Botox, AxiLase and laser hair removal can give you maintenance-free underarms 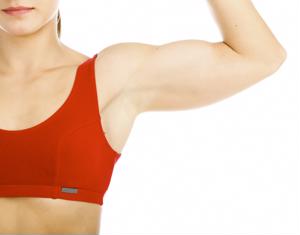 The daily routine of shaving underarms and applying antiperspirant may be a hassle for some women and simply uncomfortable for others. Moreover, limited research has suggested that antiperspirant can potentially increase a person’s risk of breast cancer or Alzheimer’s disease. As a result, women may want to consider long-lasting alternatives to razors and chemical-laden antiperspirant.

Imagine how nice it would be to get ready in the morning without fear of getting caught with underarm stubble or sweat stains.

Kelly Osbourne can surely relate. The Daily Mail reports that the reality television show star posed at an E! event in Germany wearing a chic red sheath and sporting a Marilyn Monroe-inspired hairstyle, but one detail detracted from her stylish look: underarm stains.

Rocker Ozzy Osbourne’s daughter tweeted about the incident. “:( pulled a fashion no no last night i had sweat marks because there we heat lamps on the red carpet! #eww,” she wrote.

Other stars may also want to think about procedures that can give them pristine pits, since it appears as though the pose du jour for fashion magazines involves hands over or on the head with underarms exposed. The Daily Mail featured a spread of Bazaar, GQ, Cosmopolitan, Elle and several international Vogue covers featuring celebrities showing off their hairless (except in the case of James Franco’s Paris Men’s Vogue shoot) and moisture-free armpits.

“Models and actresses not only have to worry about complexion, hair and nails, they now have to ensure their armpits are flawless too,” according to the news source.

CBS News reported on the trend of Botox as a sweat inhibitor during the 74th annual Academy Awards. The last thing that stars who don high-end gowns and couture evening wear want is a sweat stain ruining the ensemble.

AxiLase is a more permanent solution to underarm sweat. The one-time laser treatment words by decreasing the amount of sweat glands in the armpit.

Botox injections work to prevent excessive sweating by paralyzing the sweat glands, a treatment that is effective for about six months.

Laser hair removal works by damaging hair follicles directly beneath the skin, thereby slowing hair growth, according to the Mayo Clinic. It can take a few sessions in order to completely cover an area, and follow-up procedures may be needed in order to maintain a fuzz-free underarm. To treat a relatively small area like the armpit, the procedure may take less than one hour per visit.