Home | Blog | Can a morning cup of joe protect you from skin cancer? 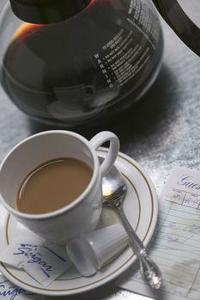 Sunshine delivers a dose of vitamin D and brightens your spirits, but those ultraviolet rays can be deadly. Skipping the sunscreen could mean wrinkles, fine lines and brown spots, which can be treated with laser skin rejuvenation techniques. But short of avoiding the outdoors, how else can you protect your biggest organ besides slathering yourself in creams and lotions?

According to a new study from Rutgers University, that morning cup of joe may be the answer to your problem. Lead investigator Allan Conney, who directs the Susan Lehman Cullman Laboratory for Cancer Research, explained that caffeine may guard against certain types of skin cancer. The compound, which helps millions of Americans wake up every day, may inhibit the activity of an enzyme called ATR.

Conney and his team conducted their study in mice, which were split into two groups – one of which was fed caffeinated water, while the other received regular water. The animals were exposed to lamps that emitted UVB rays and damaged the DNA in their skin cells.

The scientists discovered that the rodents that had consumed caffeine could more effectively get rid of damaged cells, lowering their risk of developing cancer.

However, when the mice were exposed to chronic UVB rays for an extended period of time, all of them developed tumors, regardless of caffeine intake. The team explained that this indicates that the ATR enzyme may work best at the pre-cancerous stage, before UV-induced skin cancers have had time to progress.

“Although it is known that coffee drinking is associated with a decreased risk of non-melanoma skin cancer, there now needs to be studies to determine whether topical caffeine inhibits sunlight-induced skin cancer,” Conney stated.

He added that although numerous human epidemiologic studies have connected caffeine to significant decreases in many different types of cancer, the protective mechanisms are still a mystery to scientists.

The National Cancer Institute reports that sunlight-induced skin cancer is the most prevalent form of cancer in the U.S., producing more than 1 million new diagnoses each year.

Although the finding that coffee can protect skin is interesting, using sunscreen is still the tried-and-true method of warding off harmful UV rays. Products should be applied regularly in order to achieve optimal protection.