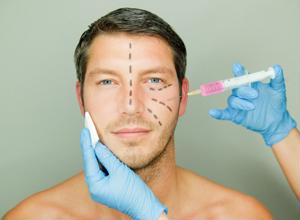 When we think of manly men, we usually think of guys with big muscles who work out and aren’t afraid to get their hands dirty. But who says they can’t take steps to make sure their skin looks good, too? After all, males aren’t any more immune to wrinkles, fine lines and sunspots than their female counterparts.

Take 64-year-old Danny Paranik, for example. The personal trainer told the Pittsburgh Post-Gazette that he lifts weights four times a week, eats a nutritious diet and plays competitive tennis, but even these health-conscious choices could not hide the signs of aging on his face.

“I live in a very physical world. My life’s mantra would be: Be the best ‘you’ you can be,” he said, quoted by the news source. “I was feeling very good inside, but my outside wasn’t matching my inside.”

When the first wrinkles showed up, Paranik visited his local medical spa to talk about getting a Botox treatment. The minimally invasive procedure involves relatively painless injection of the Clostridium botulinum toxin Type A, which relaxes the muscles and smooths out lines. This helps restore youth and vitality to the skin.

Paranik is one of many American men who are increasingly looking to Botox treatments to keep themselves looking refreshed. Statistics from the American Society for Aesthetic Plastic Surgery reveal that guys made up about 8 percent of all cosmetic procedures performed in 2010, a figure that has increased by more than 88 percent in the past decade.

In fact, so many males are choosing Botox that Time Magazine dubbed the technique ‘Boytox’ in 2009.

The procedure is a favorite with both patients and doctors for its safety and effectiveness. According to plastic surgeon Mahlon Kerr, the treatment is particularly good for the frown lines and crow’s feet.

Botox offers “an excellent way to postpone [more invasive] plastic surgery for patients who are not yet ready for that option,” Kerr told Nutrition Diet News.

Injections are famously popular among celebrities like Real Housewives of Beverly Hills star Camille Grammer, who called the technique both “amazing” and “easy,” according to The Insider. Her co-star Adrienne Maloof agreed.

“If you do a little maintenance here and there, it will help later in life to keep you from having a radical procedure that could change the way you look completely,” Maloof told the media outlet.