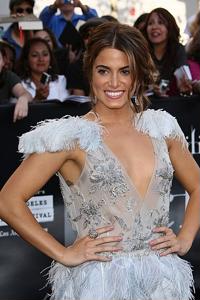 Twilight actress Nikki Reed recently got married and marked the occasion with a laser tattoo removal. She had the name of a former lover removed from her wrist, according to media reports.

The starlet said that the old beau’s name needed to go now that she is married to singer-songwriter Paul McDonald.

“That was called a period of time in my life that we’re now removing,” Reed said, quoted in the San Francisco Chronicle. “It’s somebody’s name. It’s a ballet dancer’s name that I met while I was living in Russia.”

Reed isn’t the first celebrity to get a partner’s name inked on them only to have it removed or altered after the demise of the relationship.

Earlier this spring, the blog Bossip reported that Marc Anthony had his “Jennifer” wrist tattoo covered up with an intricate design after the dissolution of his marriage to the pop singer.

Angelina Jolie made the mistake of having her partner’s names tattooed on her several times over, and has since gone through a number of laser tattoo removal procedures and alterations.

First, the actress got a tattoo of an “H” on her wrist in honor of then-boyfriend Timothy Hutton. After their split, she re-dedicated the design to her brother, James Haven. During Jolie’s three-year marriage to actor Johnny Miller, the pair got matching Japanese character tattoos, which she has since had covered up with a quote.

Perhaps most famously, Jolie had two designs to commemorate her union with Billy Bob Thornton: one on her upper arm above a dragon and another that was rumored to be in a much more private area. Jolie told the media that she would have “a lot of dermatology appointments” after the couple’s divorce.

Let’s hope that her relationship with Brad Pitt is a lasting one, since she told media outlets last year that she got a tattoo “for Brad” on her inner thigh.

Charlie Sheen had his inked tribute to Denise Richards removed from his wrist after the couple’s 2006 divorce. Then, in 2008, Richards had her “Charlie” ankle tattoo turned into a fairy.

In a creative move, Johnny Depp famously had his “Winona Forever” tattoo turned into “Wino Forever” after the actor split with Winona Ryder in the early 1990s.