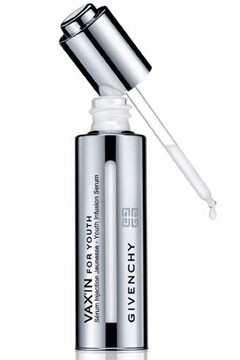 Wouldn’t it be great to able to vaccinate against the signs of aging? According to French beauty brand Givenchy, their new serum, Vax’in For Youth, does exactly that.

The serum reportedly mimics the science behind conventional vaccines and applies it to the ageing process of the skin.  Traditional vaccines introduce a small amount of a disease into the body, allowing the immune system to produce enough antibodies to tackle the disease if infected in the future.

The serum works in a similar way.  By tricking skin cells into believe that they are being damaged, the body will respond by producing the compounds that boost the skin’s resistance to the damage. This would in turn slow down the rate of aging in the skin.

Professor Suresh Rattan, a biogerontologist at the Laboratory of Cellular Aging in the molecular department of the University of Aarhus in Denmark, has been working with Givenchy on the serum.

“Science cannot make you immortal. Science cannot perform miracles,” Rattan tells the Daily Mail. “From a biological perspective, all aspects of organisms—brain, muscles, bone, skin—decline with age, but it is possible to slow this decline.”

Rather than focusing on the factors that contribute to the acceleration of cell aging, Professor Rattan’s research focused on the body’s protection system that is triggered once cells are under stress. During experiments, different cells, including skin cells, were exposed to high temperatures for short periods of time. The exposed cells were found to age slower, live longer and function better than cells exposed to normal temperatures.

Based on these findings, Givenchy centered his serum around hypotaurine, a protein found naturally in the body, and sanchi, a ginseng extract. The two ingredients were found to increase the production of the protective compounds by 24% over the course of six hours during test tube studies.

But does Givenchy’s theory translate into real life?  The brand claims its tests show reinforcement in tone and elasticity as well as slowed wrinkle formation. However, Vax’in has only been tested on 32 women over a four-week period and the findings have not been published in any peer-reviewed journals.

“We know that in order for our products to be credible, we need to carry out longer-term tests on more subject and we will do that,” says Laurent Nogueira, the company’s scientific director. “But for now, we’re satisfied that our studies show that Vax’in is doing something at both a cellular level and at a level which is visible on the skin.”

While Dr. Chris Flower of the Cosmetic Toiletry and Perfumery Association (CTPA) admits that the concept is fascinating, he adds, “the ideas are definitely sound, but at the moment it’s difficult to say whether the science translates to the product, and whether any of the effects are long-lasting or extensive.”

As with any new product promising the ultimate cure to wrinkles and aging, it is important to wait for the clinical trials to be published. The science behind the theory is certainly groundbreaking, however, third party analysis and FDA-approval are two ways to ensure product efficacy.

Yes, We Are Open!

We are so happy to be open once again and seeing patients for their regular cosmetic treatments (by appointment only).
We are also offering free virtual consultations.

We have made some changes to ensure the safety and comfort of our patients. You can read about our New Normal Post-COVID at Reflections here.